The series is motivated by Peter Ganong and Pascal Noel’s argument that mortgage modifications that include principal reduction have no significant effect on either default or consumption for underwater borrowers. In post 1 I explained how the framing of their paper focuses entirely on the short-run, as if the long run doesn’t matter – and characterize this as the ideology of financialization. In post 2 I explain why financialization is a problem.

In this post I am going to discuss a very technical problem with Ganong and Noel’s regression discontinuity test of the effect of principal reduction on default. The idea behind a regression discontinuity test is to use the fact that there is a variable that is used to classify people into two categories and then exploit the fact that near the boundary where the classification takes place there’s no significant difference between the characteristics of the people divided into the two groups. The test looks specifically at those who lie near the classification boundary and then compare how the groups in the two classifications differ. In this situation, the differences can be interpreted as having been caused by the classification.

My objection to this measure is that due to the structure of HAMP PRA, most of the time when ΔNPV is equal to or close to zero, that is because the principal reduction in HAMP PRA is so small that there is virtually no difference between HAMP and HAMP PRA. That is, as the ΔNPV converges to zero it is also converging to the case where there is no difference between the two programs and to the case where principal reduction is zero.

To see this consider the structure of HAMP PRA. If the loan to value (LTV) of the mortgage being modified is less than or equal to 115, then HAMP PRA does not apply and only HAMP is offered. If LTV > 115, then the principal reduction alternative must be considered. Under no circumstances will HAMP PRA reduce the LTV below 115. After the principal reduction amount has been determined for a HAMP PRA mod, the modification terms are set by putting the reduced principal loan through the standard HAMP waterfall. As a result of this process, when the LTV is near 115, a HAMP PRA is evaluated, but principal reduction will be very small and the loan will be virtually indistinguishable from a HAMP loan. In this case, HAMP and HAMP PRA have the same NPV (especially as the data was apparently reported only to one decimal point, see App. A Figure 5), and ΔNPV = 0.

While it may be the case that for a HAMP PRA modification with significant principal reduction the NPV happens to be the same as the NPV for HAMP, this will almost certainly be a rare occurrence. On the other hand, it will be very common that when the LTV is near 115, the ΔNPV = 0, which is just a reflection of the fact that the two modifications are virtually the same when LTV is near 115. Thus, the structure of the program means that there will be many results with ΔNPV = 0, and these loans will generally have LTV near 115 and very little principal modification. In short, as you converge to ΔNPV = 0 from the HAMP PRA side of the classification, you converge to a HAMP modification. Under these circumstances it would be extremely surprising to see a jump in default rates at ΔNPV = 0.

Note that the authors’ charts support this. In Appendix A, Figure 5(a) we see that almost 40% of the authors’ data for this test has ΔNPV = 0. On page 12 the authors indicate that they were told this was probably bad data, because it indicates that the servicer was lazy and only one NPV test was run. Thus this 40% of their data was thrown out as “bad.” Evidence that this 40% was heavily concentrated around LTV = 115 is given by Appendix A, Figure 4(d): 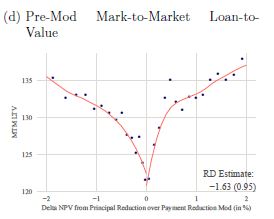 I think this is mostly a lesson that details matter and economics is hard. It is also important, however, to set the record straight: running a regression discontinuity test on HAMP data cannot tell us about the relationship between mortgage principal reductions and default.