Over the last quarter of the 20th century mortgages grew to make up the principal asset in commercial bank portfolios and concomitantly housing now plays an increasingly important role in the economic cycle (Jorda Schularick & Taylor 2014). The shift in commercial bank balance sheets is depicted in Charts 1, 2, 3, and 4 all of which are drawn from the historical data available on the FDIC’s website: https://banks.data.fdic.gov/explore/historical. The vertical lines on the charts divide them into three eras: the war and post-war era up until 1965, the era of inflation from 1965 to 1981, the era of regulatory reform from 1981 to 2008, and the post-crisis era.

Chart 1 provides context, giving an overview of how the asset side of the commercial banks’ balance sheet has evolved over time. During World War II Treasuries (held as investment securities) and cash accounted for more than 80% of bank balance sheets. This declined fairly steadily, so that in 2007 cash and investment securities (which now were dominated by Agency obligations) fell below 20% of assets. This decline was mostly accounted for by an increase in bank lending. 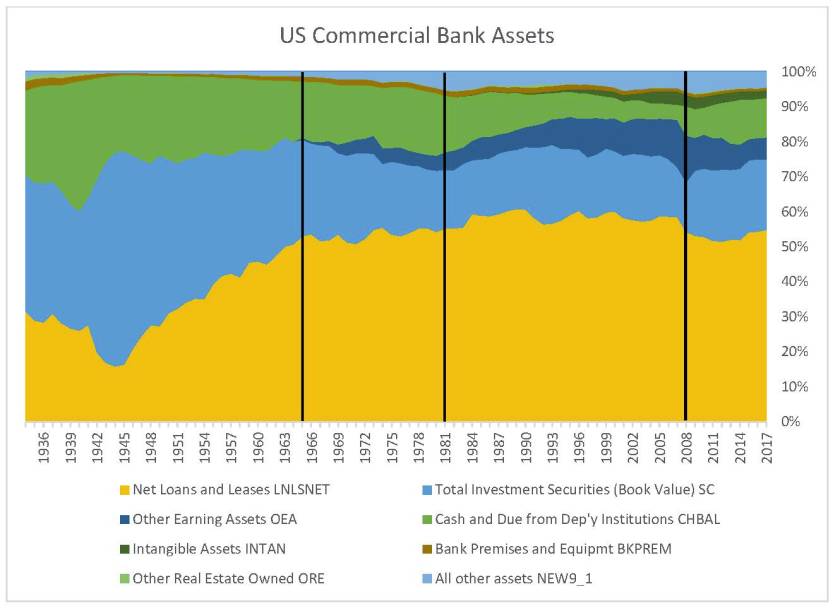 Chart 2 shows that the dramatic increase in commercial bank lending after World War II only represented an increasing flow of bank funding into business activity up until the early 80s (with a decline after the oil price shock of the mid-1970s). (Note that “C&I loans” is short for “commercial and industrial loans.”) From the early 1980s on, commercial bank business lending is mostly on the decline as a percentage of activity, and instead real estate loans begin to dominate commercial bank balance sheets. Furthermore, because most of the Agency securities in which commercial banks invest are also mortgage-backed, by 2004 an unprecedented 40% of commercial banks balance sheets are supporting real estate and that fraction has barely declined up to the present.

Chart 2: Select US Commercial Bank Holdings as a percent of assets 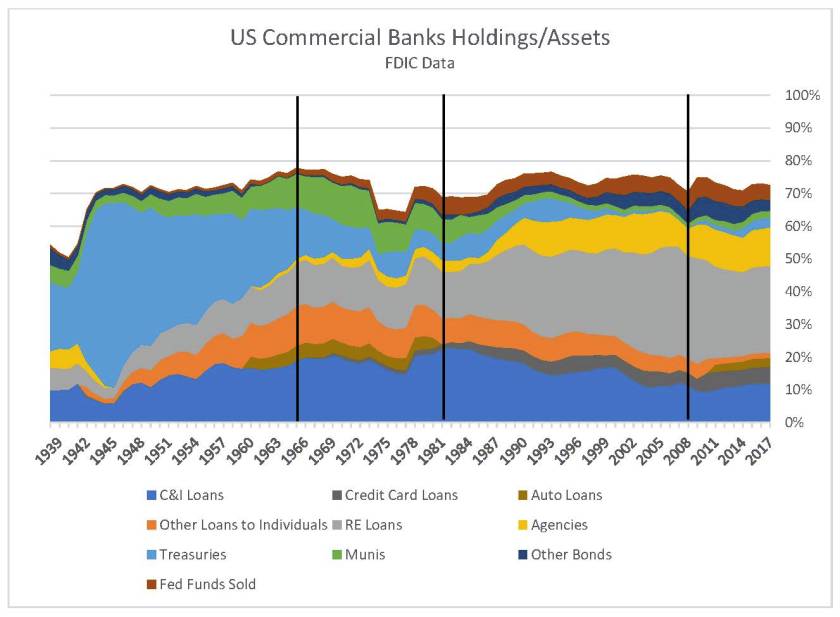 Chart 3: Select US Commercial Bank loans as a percent of total loans 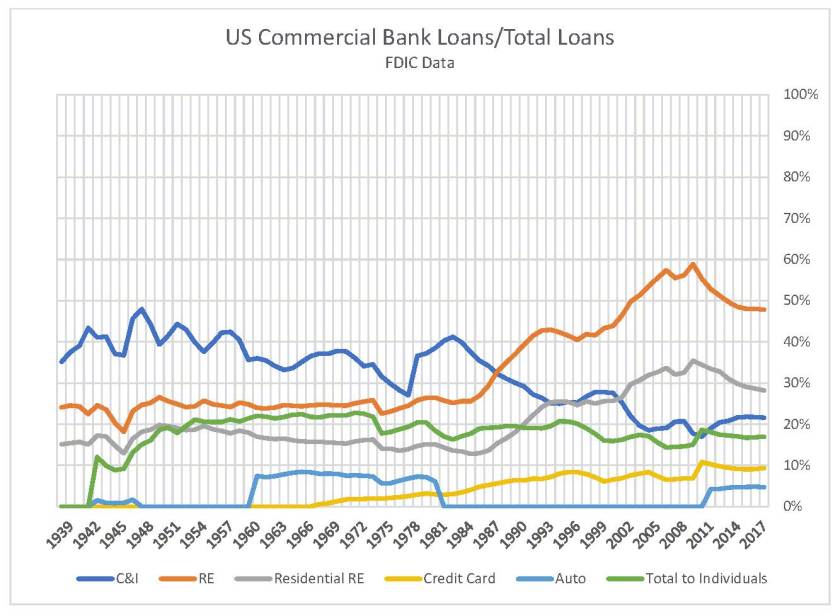 In short, the data makes us ask: What happened to commercial banks during the era of regulatory reform? Furthermore, the pattern of the data in Chart 3 indicates that residential mortgage policy might have something to do with it.

1930s monetary theory held that the use of demand deposits to finance long-term assets like real estate would foster asset price bubbles in the long-term assets thus financed due to the feedback loop between bank expansion of demand deposits, loans, and asset prices. As a result, in the 1930s commercial bank real estate loans were funded by savings and time deposits and accounted for only a fraction of them, typically about 40%. And savings deposits made up only a fraction of the deposit base compared to demand deposits. Thus, it is worth looking at what has happened to commercial bank liabilities, too.

Chart 4 shows that commercial bank liabilities were composed mostly of demand deposits in the immediate post-war period, but their share declined steadily from about 1955 to 2008. Unsurprisingly the most dramatic decline took place during the inflationary era when most depositors were looking for a way to avoid holding a non-interest bearing asset. Savings and time deposits make up by far the majority of bank liabilities today. Even so, the growth in real estate loans up until the 2007 crisis was much faster. As a result, the ratio of real estate loans to savings plus time deposits grew steadily from 1983 to 2007 (see Chart 5). Another point to take into consideration is that savings deposits are much easier to use for transactions today than they were 70 years ago, as there are now a variety of means by which savings are transferred automatically in order to cover checks. 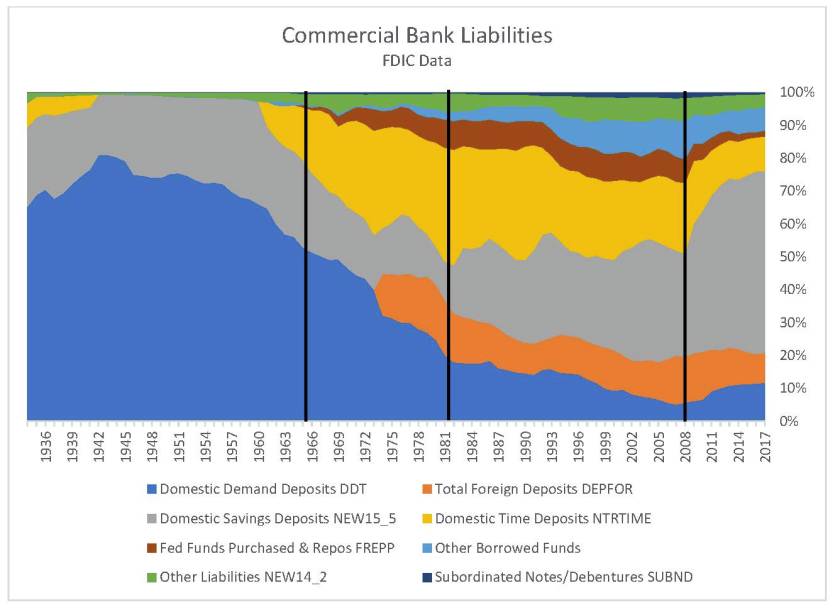 Chart 5: US commercial bank real estate as a fraction of savings + time deposits 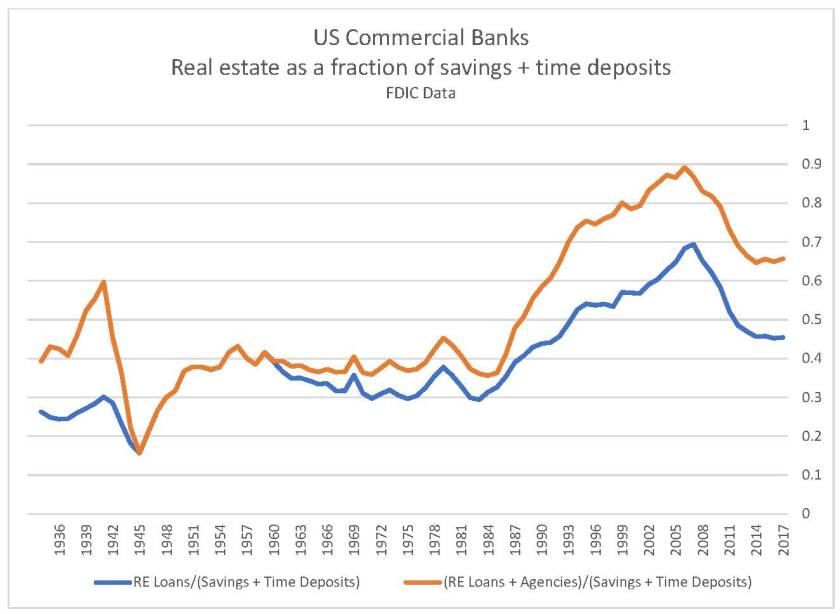 Since real estate loans appear to have played a very important role in regulatory reform’s transformation of commercial banking, it’s worth taking a look at what was going on with the institutions that were set up in the 1930s to fund real estate loans, the thrifts. The FDIC has data on the thrifts under the title “Savings Institutions” dating from 1984.

Keep in mind, however, that these balance sheet data mask the fact that the thrift industry stopped growing at the end of the 1980s. Thus, even though thrifts accounted for approximately one-third of depository institution assets from the post-war period through 1988, today they account for only about 5% of depository institution assets. In short, what is going on in the diagrams below matters less and less over time to the economy as a whole.

Charts 6 and 7 demonstrate that for thrifts the era regulatory reform did not affect their activities. They would continue to specialize heavily in real estate loans right up until the 2008 crisis. And only in recent years have the thrifts begun to diversify their activities to a significant degree. Chart 8 presents thrift liabilities and demonstrates that aside from an increase in FHLB loans and in brokered deposits in the years preceding the recent crisis, the liability side of thrift balance sheets didn’t change much either.

Chart 6: Savings institutions holdings as a percent of assets 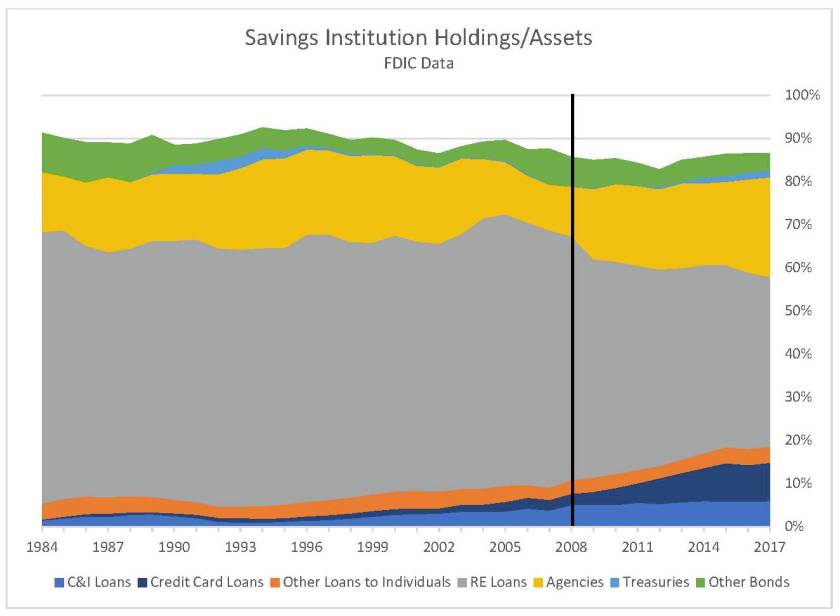 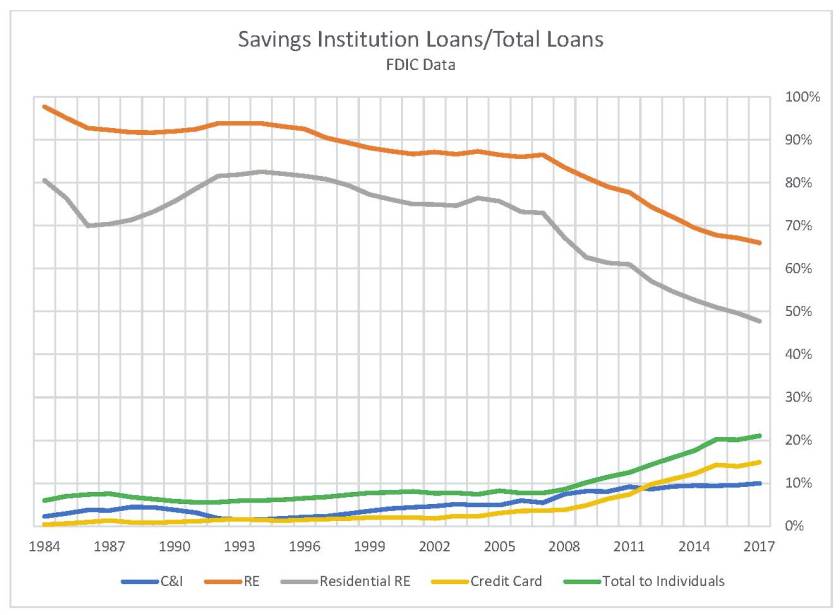 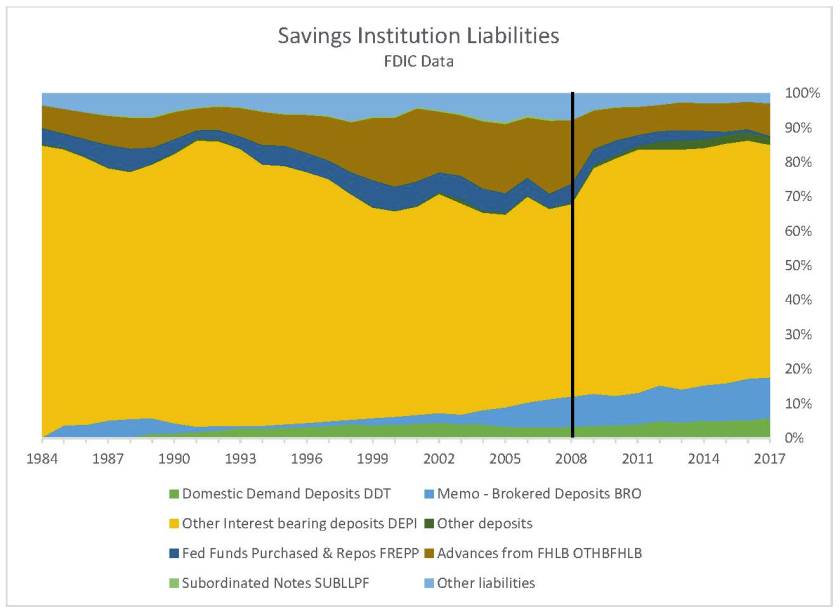 To make very clear how the financial system as a whole evolved over the era of regulatory reform it is useful to combine the balance sheets of the commercial banks and the thrifts. (Together they cover close to 95% of depository assets. Credit Unions are omitted because I do not have that data.) Chart 9 presents holdings of loans and securities as a percent of assets. We see that changes in the aggregate balance sheet from 1984 to 2007 are in general not large with a few exceptions: the percent of combined commercial bank and thrift balance sheet devoted to business lending declined by 31%, while real estate loans increased by 21% and agencies increased by 48%.

On the other hand, Chart 10 presents the same data as Chart 9 with two differences: Both real estate loans and agencies on commercial bank balance sheets are separated from those on savings institution balance sheets. Chart 10 shows the primary transition that took place amongst depository institutions during the era of regulatory reform. Commercial banks started funding the mortgages that the shrinking thrift industry was no longer financing. 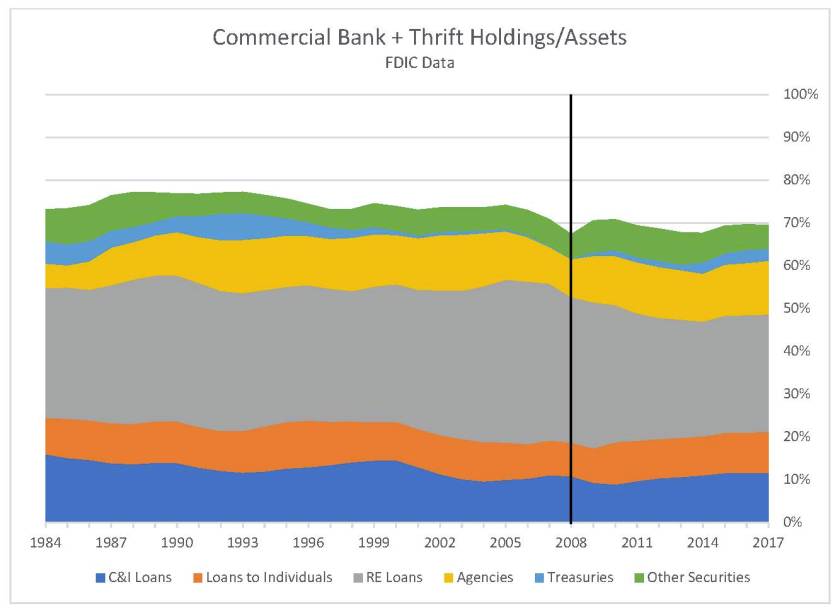 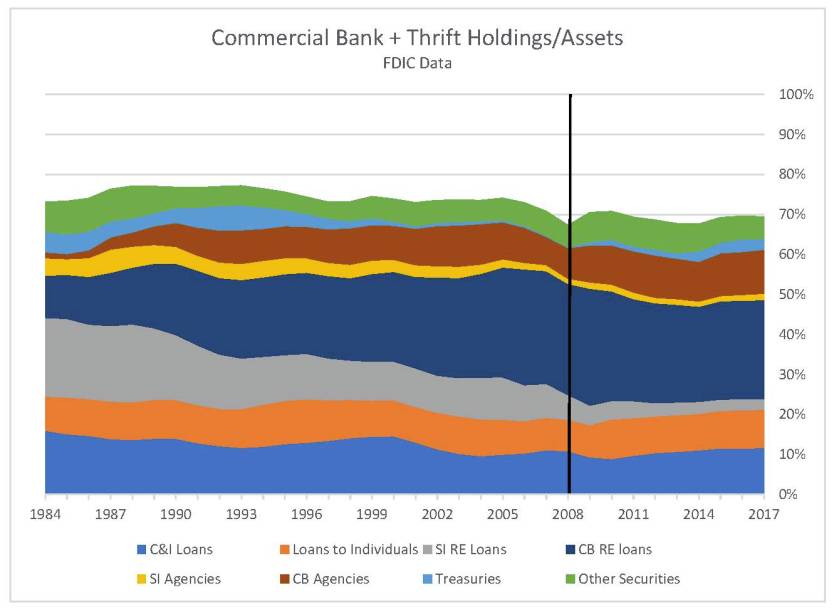 So what conclusion should we draw from these charts? The era of regulatory reform was one in which commercial banks grew to look more and more like the thrifts on both the deposit and liability sides of the balance sheet. As a result, the effect of the regulatory response to the instability of the thrift institutions in the 1970s and 1980s was to reform the banking system so that it would be more like the unstable institutions. One result of this reform was that when the 2007-09 crisis blew up the U.S. banking system was structurally unsound and had to be saved by a simply grotesque bailout of the commercial banks.

Arguably another result, as I will argue in an upcoming post, was that the new structure of the banking system fostered the growth of a housing price bubble. That post will also attempt to fathom why this rather obviously destabilizing reform of the banking system took place. Before doing so, however, in my next post I discuss the character of 30 year fixed rate mortgages and the challenges of financing them.